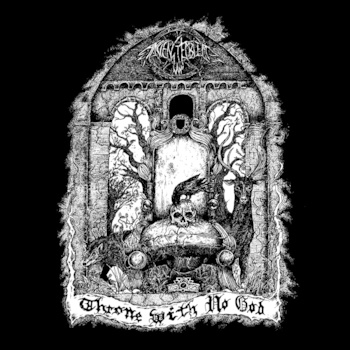 Ancient Emblem new “Throne with No God” LP is out now

Ancient Emblem was born from the passion for gloomy and raw sounds of 4 individuals which were coming from different past projects (Sejtan, Destierro, Annunaki Revenge, Crickbat, Justice Department, etc.) but with many points in common such as a strong believe in DIY as the only way for working as a band, and an even stronger hate for any authoritarian attitude which tries to dominate others, being human or not. We believe in a veg(etari)an way of life and we stand against all kinds of domination and discrimination such as religion, homophobia, sexism, speciesism, racism, fascism or nazism. Maybe it sounds obvious for a kind of band like this, but sadly, strange times are running everywhere, even also in this community. “Throne With No God” is their first LP, which is going to be released in 525 copies on the following labels:
Svoboda Records
La Agonía De Vivir
Crust As Fuck Records
In My Heart Empire
La Humanidad Es La Plaga
Dingleberry Records

ancient emblem
Search
About This Site