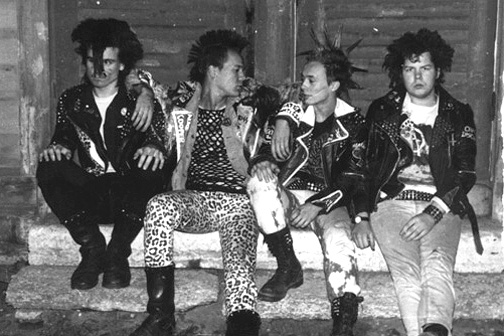 Formed in 1981, the original line-up was: Jonsson – Bass, Nillen – Vocals, Charlie – Drums, Jocke – Guitar. Jonsson was, for a time, bassist in the SHITLICKERS, another early Swedish d-beat band. After rehearsing for a while, they released their first 7″ EP Anarkist Attack.In 1982 they kicked out Nillen. Jonsson took over the vocals part, and Conrad took over the bass playing. The next 7″ EP, called Raped Ass, was released in 1983. This work is considered one of the most severe in the history of hardcore. In 1984 they released another 7″ EP, Victims Of A Bomb Raid. In 1986 they released a mini-Lp (12″) called Criminal Trap. (This 12″ is also included as a bonus on the Absolut Country of Sweden CD). At this time Jocke had got tired of the band and they asked Cliff if he wanted to join the band but he said no, and the rest of the band members got tired of the problems and it resulted in the band splitting up.

In 1990 they decided to start the band again after Cliff had agreed to join, and they say that its thanks to him that they regrouped. They released the comeback album Absolut Country Of Sweden the same year, . In 1993 they released a raw live album Made In Sweden. The show was also shot on video but never released. They later released a new live 7″ single Fucked In Finland and later on they released the album Scandinavian Jawbreaker. After the release of this album the band split up and the members started in other bands such as DRILLER KILLER (Cliff), and WOLFPACK (Jonsson).