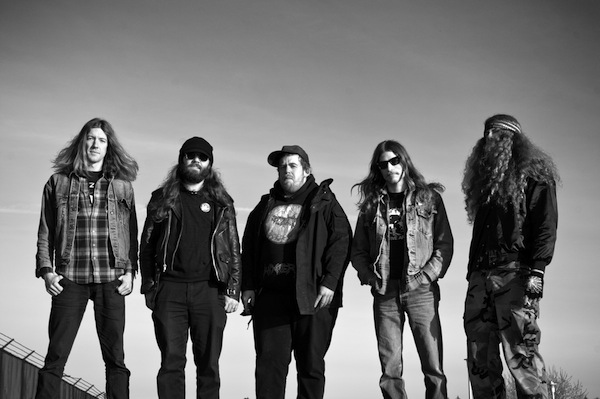 Black Breath are to enter the studio with Kurt Ballou in Godcity Studios for their third LP to come out on Southern Lord Recordings with recording in late this Autumn to record their third full-length album for the label.

Returning to GodCity Studios in Salem, Massachusetts to record once again with Kurt Ballou (Converge), as with their landmark 2010 debut, Heavy Breathing, and even more consuming 2012 follow-up, Sentenced To Life, Black Breath will begin recording their massive third full-length at the end of November and complete it in mid-December for release in early 2015. Based on the band’s decimating track record since their inception only eight years ago, the still unnamed album is sure to be one of the highlights of the musical underworld in 2015.

einventing the classic Stockholm deathcrush of Dismember and Entombed through a merciless d-beat hardcore delivery, Black Breath has dominated the media and fans alike with their recorded output tenfold with each release since their 2006 inception, having since become an American metal powerhouse and major priority for Southern Lord. The band has overthrown city after city throughout North America, UK, Europe, Japan and Australia on tour alongside the likes of Nasum, Nails, Converge, Victims, Tormented, Corrosion Of Conformity, Christian Mistress, Noothgrush, Rise and Fall, Ringworm, Yautja and Mutilation Rites, has supported Neurosis, Napalm Death, Rotten Sound, Entombed, Sunn O))), Wolves in the Throne Room, Autopsy, DRI, Amorphis, Tragedy, From Ashes Rise and other massive acts, and has performed at major festivals and events including Maryland Deathfest, Sonisphere, Hellfest, Tuska, Fluff Fest, SXSW, The New England Metal & Hardcore Festival, Roadburn, The Power Of The Riff and more.