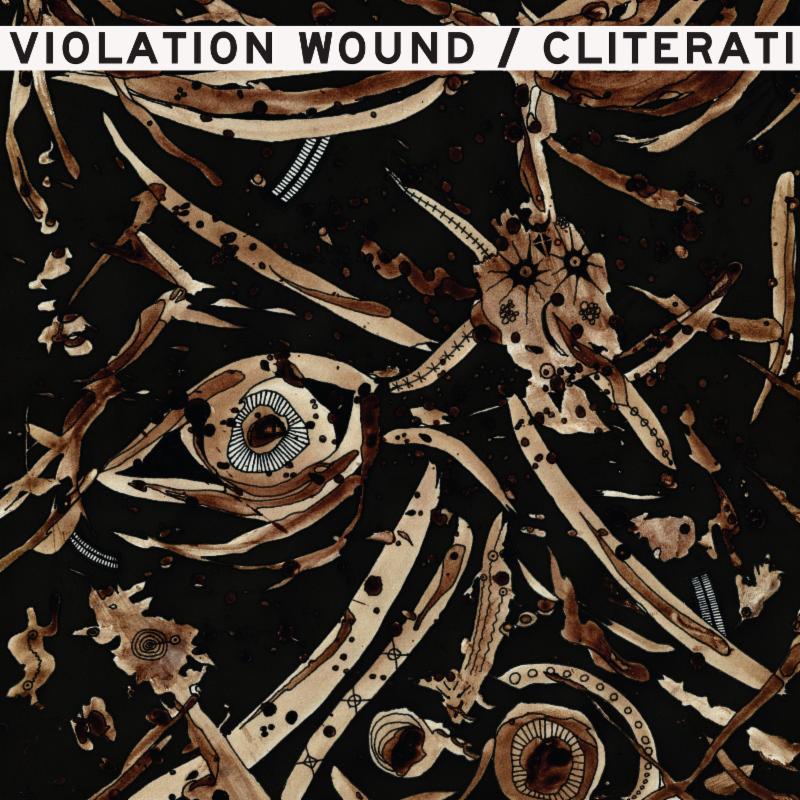 CLITERATI — featuring former members of Poison Idea, and Voetsek — plays Discharge/Doom-influenced queercore/d-beat/thrash crust. CLITERATI believes in equality through inclusion. “We are queer, straight, people of color, and white,” relays Lawless. “Our influences include the bands Doom, L7, and Bolt Thrower, with a healthy dose of Pacific Northwest D-punk. This band was brought together by Amelia Collins and we continue in loving memory of her vision to bring a breath of fresh air to Portland punk… get your clit in the pit.” The band’s forthcoming split with VIOLATION WOUND follows the recently issued three-track Nuked At Birth EP,

Featuring Autopsy and former Abscess mastermind Chris Reifert on guitars and vocals, alongside bassist Joe Orterry, and drummer Matt O’Connell, Oakland, California-based VIOLATION WOUND was forged in a beer and whiskey-soaked basement in June of 2013. Driven to manufacture 100% real punk rock, fueled only by aggression and punishing riffs, VIOLATION WOUND honors the raw, dirty, and pissed off ways of the genre’s original innovators, while carving out a path to call their own. Fans of Toxic Narcotic, Zeke, and Fear pay heed.

Listen to one track from each band here:

Issues CLITERATI‘s Ami Lawless of the union, “Getting to do a split with VIOLATION WOUND is a high point for our band! The track you all get to preview has lyrics that reflect the anger and frustration many of us are experiencing right now. If you walk away with just one message from this split, hopefully it’s that we are all in this together: queer, straight, POC or white, things can and will change when we join forces and tear down the system of hate & oppression”.

Adds Reifert, “We here at VIOLATION WOUND headquarters are fired up, stoked, and foaming at the mouth about this here snazzy split with CLITERATI. Listen if you want to have your brain melted into liquid magma while you get your ass handed to you.”

Writes the esteemed blog, “As far as I’m concerned, the appearance of anything new from Portland, Oregon queercore metalpunks CLITERATI is cause for celebration. The fact that their latest offering comes twinned with Autopsy god Chris Reifert’s punked-up project VIOLATION WOUND as part of a new split LP is even more delicious – as is that said new material lights a signal fire right underneath the Nazi scumfuck asses that vocalist Ami Lawless and their bandmates are fighting against. As we’ve seen before, Portland doesn’t suffer Nazi fools gladly, and Lawless is no exception. On “Alt-Wrong,” you can feel the rage emanating from their very pores as they spit, “I’ll wipe my ass / With your Confederate flag / Won’t be no cross burning / Here tonight / We’ll fuck you up / Stand and fight!”

CLITERTI
A1. Water Is Life
A2. Nowhere Feels Like Home
A3. Nuked At Birth
A4. War On The Poor
A5. Alt-Wrong

VIOLATION WOUND
B1. Victimizer
B2. Scrapheap
B3. Worthless Figurehead
B4. Salt In The Wound
B5. The Church Of Go Fuck Yourself

In related news, CLITERATI will blaze stages on a near-two-week West Coast tour set to run from July
27th through August 5th. See all confirmed dates below.