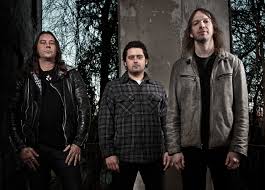 A 2015 release date via eOne Music will be announced soon for the new LP, the follow-up to 2012′s De Vermis Mysteriis.

“Everyone is asking what the new High on Fire music sounds like,” says drummer Des Kensel. “Chew on some mescaline and listen to side B of Sabbath’s “Master of Reality” backwards at 78 RPM and it might give you an idea.”