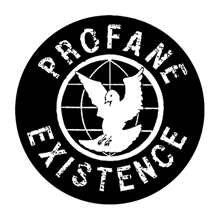 The Profane Existence collective is undertaken a huge overhaul as their “BACK TO OUR ROOTS” efforts begins which means new cities and new operators for PE
From PE website:
“The Profane Existence Collective was formed in 1989 as a resource for the worldwide activist punk community. Over the years PE has published a magazine, released numerous records, and ran a large distribution operation. For the last 25 years volunteers and collective members have donated both their passion and time working endless hours making PE a worldwide name in punk rock and in activism. A few things have changed through the years and some of the biggest changes yet are now upon us…

In 2011 PE changed hands when founding member and main operator Dan Siskind stepped away leaving Ben Crew at the helm. In the last few years Ben rallied many of the old contributors and worked furiously getting out PE 64 and released a slew of records. After many hours of hard work Ben is stepping away from PE. So rather than allowing PE to die out the main operations will be changing hands yet again. However that is just one part of the many changes in store for PE.

Profane Existence will continue have many contributors and collective members however it will now be jointly spearheaded by Chris Luton (Appalachian Terror Unit) and Josh Lent (ROÄC, Custerfux, Chain Reaction Records). This means that for the first time PE will not be based in Minneapolis. The distro and mailorder site will now be run by Josh and based in Golden/Lakewood, Colorado while Chris will be working out of Huntington,West Virginia.

After much discussion we have decided that over the years PE got a bit sidetracked from the highly charged political punk outlet that it once was. Our goal is to get back on course. We expect many bumps in the road especially in the beginning, as we get familiar with websites. However we have a clear plan of action to be laid out over the next few months. You can expect the following changes…

First off we be trading much more and offering wholesale on PE releases. Which will mean a huge spike in the PE distro. We are eagerly looking forward to once again be distributing punk records on a wide scale. We are getting rid of all corporate downloading sites. No i-tunes no Amazon “no fucking way!”. In today’s world offering digital downloads makes perfect sense, however we will offer them from our own site and at a much cheaper rate. The end goal getting punk rock to places in the world it normally wouldn’t be found but on a DIY level.

We want to bring the zine back. The zine was always Dan’s baby and we hold no illusion that we will ever be able to crank it out like he did but we hope to try. The next PE release will be the second APPALACHIAN TERROR UNIT full length “We Don’t Need Them”. We plan to follow it up with an international compilation double LP that is already rolling. We feel that doing the comp is great way to work with a wide group of bands as well a good starting point in our “back to the roots” effort. Expect to hear more about it soon!

With both of us being huge record enthusiasts we plan on doing honest reviews of the records that come through the door and adding them to the site. So bands and labels send us your records! (Please only DIY political punk/hardcore/crust/metal – “no corporate bullshit!”). We plan on doing more in the way of promoting tours and festivals as well as collaborating more with political organizations raising both money and awareness through benefits and campaigns. We plan on working more with international labels to get more records overseas. So overall the biggest change to expect is more. More punk, more politics, more Profane Existence!

So yeah, when asked why we chose to take up the task the answer is simple “we love punk”. Both of us have been heavily involved in punk the last 20+ years and Profane Existence has always been an inspiration to us. We hope to restore PE to make it what it was and better-a daunting task that we happily accept. Make no mistake that although our main focus is for Profane Existence to continue along the same path, it’s still a new Profane Existence run by new people. As far as we are concerned it’s a fresh start. If you butted heads with PE in the past it was just that – in the past. Let’s be friends. If you contributed in the past and want to again, or if you never did but want to start, write us. Together – Lets make punk a threat again!

Until we get everything sorted out with the PE email. You can reach us through these.”

profane existence
Search
About This Site