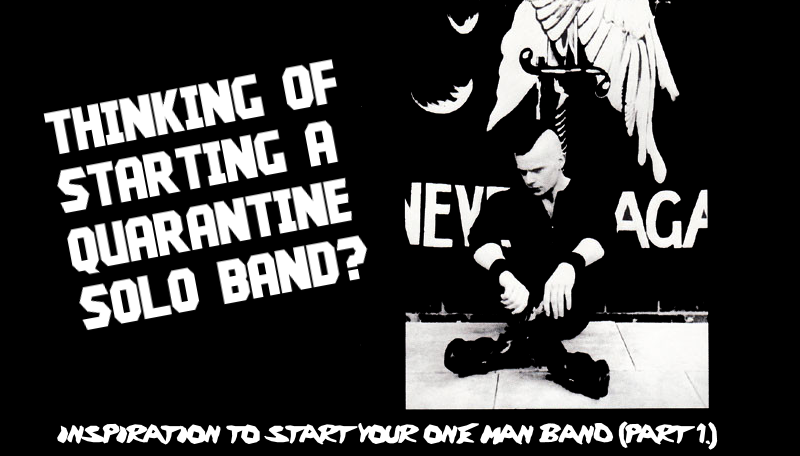 Inspiration To Start Your One Man Band (Part 1.)

I assume people are already putting together their one man bands so why not take inspiration from some people who have done it before. This is Part 1 as the more I got thinking the more solo projects I thought of.
So your stuck at home and can’t play in your band but want to make the best of this pandemic. Why don’t you start your very own one man band? Here are a bunch of people who have banged out some D-Beat and hardcore you can take influence from.

Besthoven
Seeing this is D-Beat Beater we best start with Fofäo from Brazil and his one man project better known as Besthöven, who has been pumping out release for 20 years under the title with I think at least 3 more releases planned this year (Tomorrow’s Hell, split w/ Disjawn, split w/ DHK). I am not going to list out everything cause I am sure I will leave out a few but the discography is vast and full of noisey crusty d-beat inspired by Sweden and Japan with many tributes to bands like Shitlickers, Anti-Cimex and Disclose as well as countless split releases with Disclose, Warvictims, Go Filth Go….

Condor
Coming out of France is Condor the one man project of Maxime Smadja playing a punk/Oi style that has spanned over the last 30 years and is something very wholesome to wrap your ears around. Some of you may know Maxime from his other acts like Paris Oi! punks Rixe or from his project with Jonah Falco titled Boss and Maxime previously played in Youth Avoiders. Condor released two cassette single which in 2017 & 2018 and subsequently released on 12″ by Beach Impediment.

Nervous SS
The one man d-beat mangel from Skopje, Macedonia and is the first balkan mangel act Nervous SS. Is new to the scene with a debut 12″ titled Future Extinction on D-Takt & Rapunk in late 2019. Nervous SS is front by and backed up by Blagoj who also plays in Gargara and previously played in Disease. Nervous SS future does not have extinction in mind with two splits planned for this year one with another solo project.

Rat Cage
Coming out of Sheffield, UK with a new LP out next month which I am sure will be in a lot of peoples top 10 at years end, Rat Cage is the side project of Bryan of Cry Havoc, Detergents, Dry Heaves, Sievehead, Skiplickers and more. Having a number releases of rowdy hardcore under the Rat Cage name including two 7″s 2017’s ‘Caged Like Rats’ and 2018’s ‘Blood On Your Boots’

And one more bonus one man band we head back to one man band maestro Maxime Smadje and his Digital Octopus project where he plays pop synth covers of punk. Covering Misfits, Cocksparrer, Cro-Mags, Blitz……