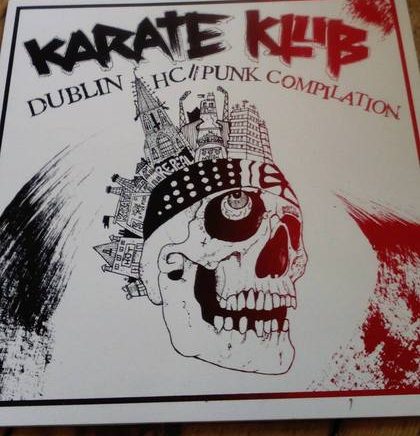 Out now is a Dublin, Ireland based compilation based around a rehearsal space on the north side of the city that has given is the likes of Disguise, Rats BLood and many more

This is a benefit compilation that has came out through the Karate Klub collective and Distro-y Records which you can order here
Limited run of 500 records, 18 bands, pressed & hand-screenprinted in Dublin. Comes with a 16-page Risographed booklet. Featuring art and photos from TwoHeadedDog, Cosmetic Plague , Leigh Photocage and Eddie Kenrick
* Comes in 3 different colour schemes

This is a must-have for anyone who calls themselves Punk on this rock of green!! All proceeds go back into the karate klub!!

The Karate Klub began it’s life during a cold winter of 2007 when a group of punks got together and raised the cash to rent a rundown warehouse in Phibsboro. It had previously operated as a martial arts centre so was aptly named.

The Karate Klub has operated as a practice space for countless bands, a social space hosting film nights and workshops and a recording studio.

The Karate Klub has produced so many bands it is impossible to name them all but something that stands out is the wide variety of styles and sub-genres that exist under one roof.

This release is a celebration of the Karate Klub as an important part of the overall D.I.Y. scene.

The vinyl format features a hand printed cover and a large booklet with details of the bands involved along with artwork and photos that highlight the history and culture.