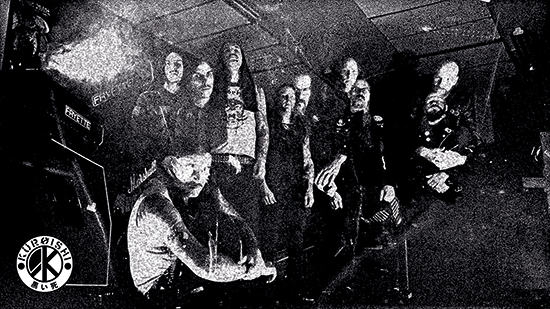 The third LP is often a turning point for punk bands. A lot of punk bands manage one great album, maybe two, and then they break up or decide to do something less immediately punk. If you manage a third album, you’re setting yourself on a trajectory. Will you tread water, keep refining your craft, or decide you’re going to “grow as an artist” and make indie rock or metal or something?

Kürøishi‘s third LP answers this question by shaving about 60 seconds off their song lengths and making their most immediate and pulverizing record yet. While the second LP was an epic steeped in atmosphere and guest appearances, this third LP is relentless velocity and nonstop attack. Quick and stripped down, fewer mid-tempo parts, riffs akin to Wolfbrigade and Tragedy that are brutal yet melodic, dark yet flirt with a later Disfear sense of rocking…but of course it wouldn’t be Kürøishi without at least a couple big epic guitar solos strewn about.

So what does Kürøishi‘s answer mean? When many punk bands are “experimenting” by their third LP, Kürøishi get leaner and meaner, upping the ante and making their most direct and PUNK record yet. The trajectory is set: without veering into metal or experimentation, Kürøishi continues to d-beat our skulls into dust with their refined hardcore destruction.