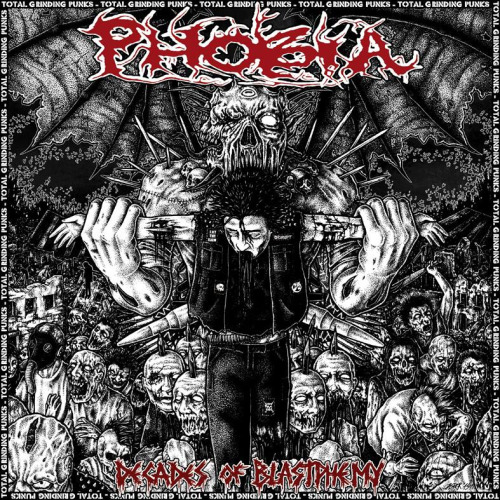 PHOBIA release DECADES OF BLASTPHEMY, a Discography of 25 years

The discography, which will first be released as a 4-disc CD collection this year in 2015 and available on vinyl in 2016, encompasses all releases, including some previously unreleased material; everything from splits, EPs, 12″s, CDs from 1990 up until their most recent “Grind Core” release on Deep Six from 2014.

The monolithic grindcore pioneer has been a band for as long as Melotov Records’ self-proclaimed “head bitch”, Melanie, has been alive. Originally hailing from Orange County, California–a less-than-favorable locale for punks as Orange County is often stigmatized by white supremacists and affluent teenagers (as portrayed by the popular television drama “The OC”)–PHOBIA now spreads its grindy, crusty, anti-establishment self across the United States from Phoenix, AZ to Austin, TX.

It’d be easy for such a nomadic band to go on a “permanent hiatus”, but vocalist (and founding member), Shane “The Pain” MacLachlan has a socio-political bone to relentlessly pick with the world. Since the first inklings of their anarchistic tendencies, the grind-crust quintet has questioned all facets of authority, covering an array of topics of their 20+ years from veganism to institutional racism.

It is PHOBIA’s ability to produce intriguing, intellectual, and succinct lyrical content against the violent, break-neck-white-knuckle musical backdrop that is grindcore that has kept them relevant for literal decades, and a founding staple in the punk/hardcore community in general.