PUTREFACTION are about to set out on their ‘EUROPEAN GUZZOLINE’ starting tomorrow that coincides with their new release ‘SCAVENGER’ 7″ EP on Distro-y Records. The Dublin trio are an unrelenting force within Crust, with a base sound of raw hardcore blended with a harsh crustal death metal sound, giving rise to a sound referred to as ‘Mad Max’ Punk. We caught up with Eric from Putrefaction who kindly answered a few questions on the EP and let us stream a track I just love off this EP – ‘WASTED TIME’ –

You decided to take a very DIY approach to this release by designing the artwork, painfully screen printing and hand numbering every cover yourself? Did you feel a need to take this approach? Do you feel the DIY aspect is in decline?

Well at first we thought we’d just release this real quick. Photocopied, cut n paste etc. Then it sort of turned into a monster which we couldn’t control. I’m passionate about my artwork and I’ve always wanted to do a fully screen printed cover. The illustration took a long time to complete, from concepts and sketches, to studying engine schematics, and actually loads of botanical stuff, I didn’t end up using, many drafts, and then the final piece. Then there was the sourcing of 100% post consumer waste card, getting that chopped up to size, cycling around with huge lumps of it and then printing. All in all there were 1200 prints for the 300 records made. It took countless hours, lots of fuck ups and mini-disasters, but now that its done I’m dead happy with it.  I don’t think the diy aspect is in decline. I think maybe it was a bit a few years ago, with lots of glossy record covers and horrible CD release but when I look around our scene and the broader diy network now, there seems to be a resurgence in hand done artwork, zines, cassettes, posters, backdrops etc. People are creating amazing shit all off their own back in every corner of the world. Up the fuckn punx!

Eric does artwork under the guise TwoHeadedDog Art 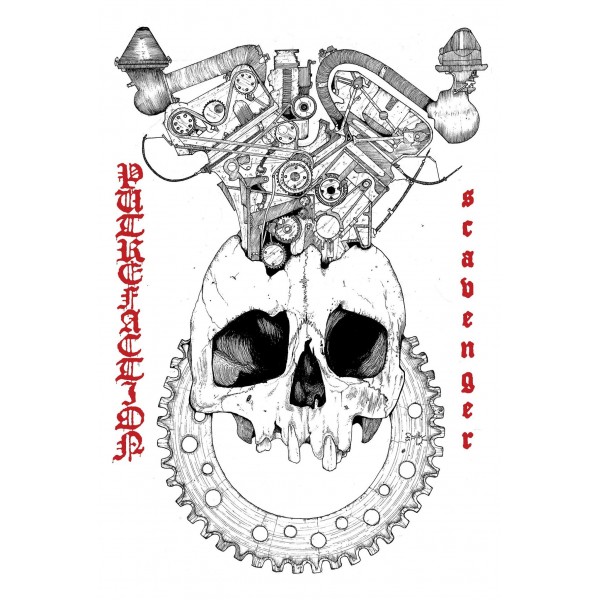 The post-apocalyptic sound of Putrefaction the imagery and artwork you use and many comparisons have drawn Putrefaction and Mad Max films closely together? Is it only coincidence that SCAVENGER and Fury Road come out the same month? How do you feel about these parallels being drawn with your Mad Max Punk?    For those of you who don’t know what I mean, some of the reviews previously commented
“Lord Humoungus took some time out from scourging the wasteland to form a vicious crust outfit with the feral boomerang kid and the red mohawk guy from Mad Max 2” Zero Tolerance
“It’s the music the bad guys from “Mad Max” probably listened to in the stereos of those fucked looking vehicles they used to drive around in.” Metal Ireland

Haha! Well George Miller contacted us directly and asked if we would mind him doing a split release of Fury Road and the new Ep. He’s an old friend so of course we couldn’t refuse! Na, it was a happy coincidence. The Mad Max connection I guess began with the demo, where we sampled the reminiscing speech of the grown up Feral Kid intro to Road Warrior “Without fuel they were nothing. The thundering machine sputtered and stopped”, as the outro to the last song.  We’re all big fans of the movies. I saw them as a kid and was just captivated by the world they had created. Then as we got older, living in run down, derelict buildings, driving spluttering black rigs and playing ragged dbeat crust, our world started to look a little like the one of the films! Albeit a hell of a lot softer! There is a serious element to these themes though. Really the whole atmosphere of the band has focussed on apocalyptic themes in a broader sense since day one. We each hold the idea that at some point in our lives this society we live in could easily come crashing down. These mechanisms we live within, being as they are, self-destructive. The world is eating itself alive. People continue to struggle and adapt but our voracious appetite for oil, consumer goods and new technologies have left us hurtling toward oblivion. I think that’s the scary thing about a film like Mad Max. The basic premise is that the world ran out of fuel and so, a society completely dependent on something now obsolete, began to tear itself apart. That’s already fucking happening! Lets hope the punks have their shit together by the time it all go’s belly up.. I’d say we better start stockpiling hair dye, bondage leathers and high octane fuel right now!

Big week for Ireland this week with Marriage Equality, do you feel this is a breaking free of the chokehold of Catholic Ireland and a separation of church and state?

Yea, a huge week really. Identifying as Anarchist and partaking in a referendum called by the very state you are fighting against may seem hypocritical, but it really transcended individual politics for me in a way. It was something I’d never experienced in this country. Practically it was about marriage and equal rights. But symbolically yes it was about a mass rejection of one aspect of a doctrine that has sucked the life out of this country for centuries. It was about solidarity, equality, empowerment and fuckin love really. I’m under no illusion that we have broken free however. The state had their own reasons for endorsing this referendum. They are the same bastards that have presided over 6 years of outright oppression of the population in the form of tax after tax, cut after cut. We still live in a country that has outlawed abortion. That has a disgusting system toward refugees and migrants, and a despicable record in relation to the treatment of the Travelling Community in the form of deprivation, discrimination and social attitudes.  Still this last weekend was an inspiring one to say the least. People came out in their thousands to say enough of the right-wing Christian bile that has soaked this country for far too long. More of that shit please!