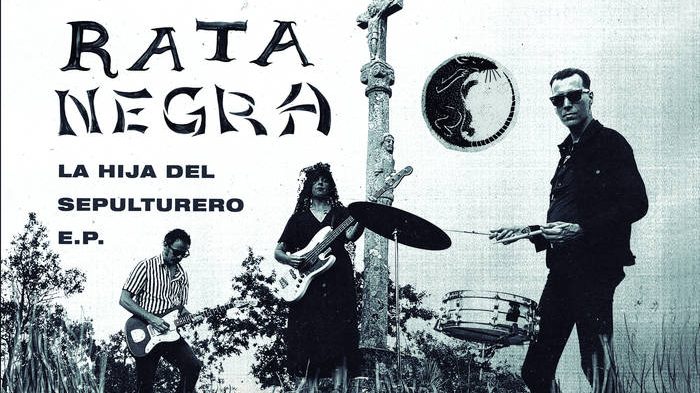 One year after their “Justicia Cósmica” LP RATA NEGRA are back with a two song single of dark pop perfection an they have released a video for their track ¿Qué Tendrá?

On the A side the Madrid power trio puts music to a poem of José María Gabriel y Galán (1870-1905) turning its melancholic prose into a mid tempo punk beauty with surf guitars and deep bass tones bringing to mind the almighty GOLPES BAJOS on speed. A chance meeting of Spanish Costumbrism and kitsch as seen on the song’s video. The flip side “Problemas, No” brings back to life VIDEO’s minor hit from 1983 updating the Synth Pop of the original to a sharp upbeat punk jam which will have you dancing your shoes off.

Recorded in Madrid at Metropol and mastered at London’s Finyl Tweek La Hija Del Sepulturero comes housed in a sleeve designed by the band’s Guitarrist Fa with help from Vocalist Violeta and includes a lyric insert.