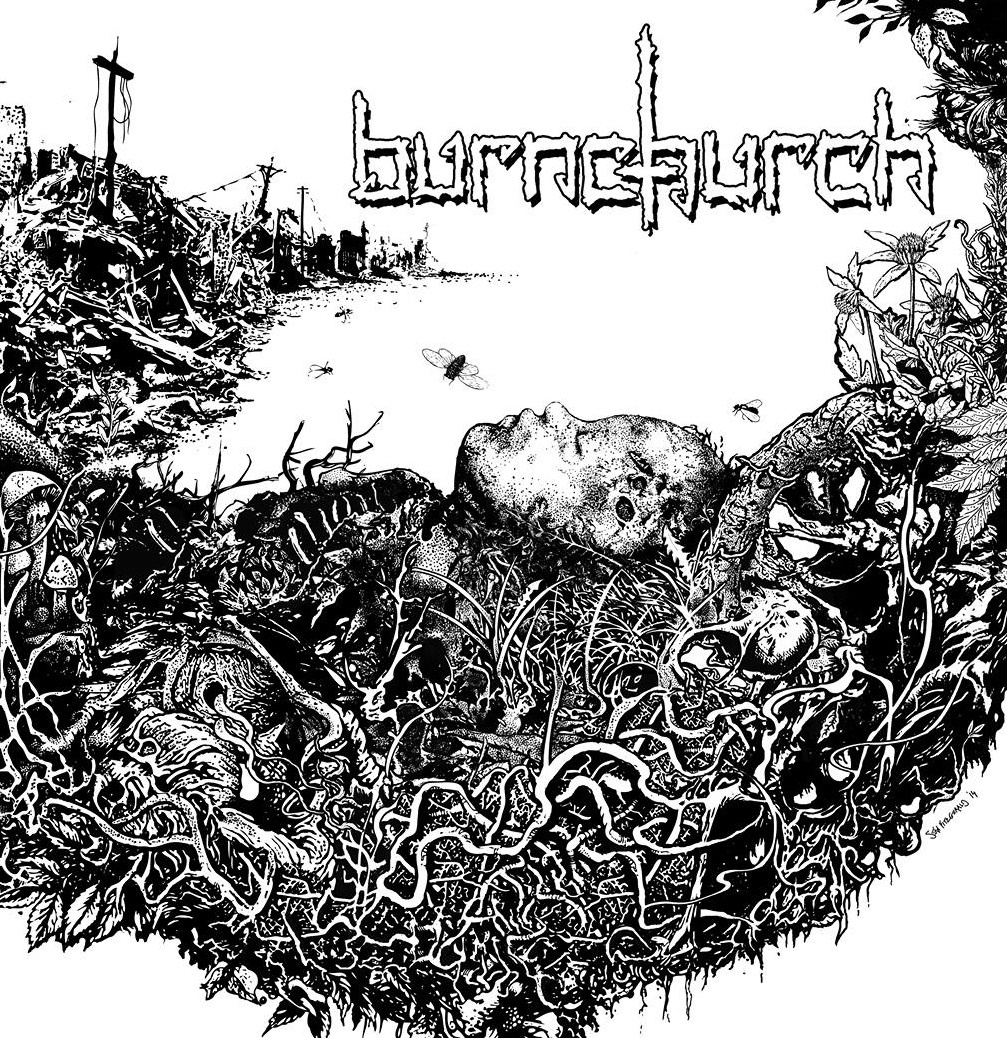 (Review by Stormhag)
The debut release from BURNCHURCH is upon us, a powerhouse comprised of members of countless bands/ex bands including EASPA MEASA, DROPPIN BOMBS and Poland’s SILENCE, who have been building up to this release for quite a while now.
The song writing on this LP is on another level. Passionate and urgent riffs make up the structure of these songs, with piercing interwoven melodies and a shredding anger beneath. Two guitars battle it out to create that chest filling feeling invoked by those bands of the early to mid 00’s mainly from the Galicia region of Spain. There is also influence from the homelands of these Irish and Polish punks, ranging from the punk rock energy of POST REGIMENT, to the blackened boiling rage of THE DAGDA. Call Burnchurch what you will, neo-crust, dark hardcore, or just punk made by people who mean it.
Clodagh’s vocals are powerful and enraged like gravel in the throat of a crow. She is backed up on some songs with deeper growls adding another layer of depth. The bass on this record is seamless. Hungry and thundering melodies beneath it all. A rumbling iron truck rolling through the wasteland.
John Bombs outdoes himself on the drums with unbelievable pace and change in each song. While his style is firmly rooted in the d-beat, every tom, every cymbal gets beaten to death, creating a tooth gritting energy. The pace is tempered on songs such as ‘Wind Strong’, carrying the words of Assata Shakur across to a mid-paced stomp.
The lyrics are nothing short of breath taking. Clodagh declares war on the established norms of this backward Irish society, infested by religious bigotry and prejudice. A wonderful and horrifying world of wild imagery is conjured up in songs such as ‘Dust and Bones’, and ‘Curses’ a song sung as Gaeilge(in Irish language) describing someone being flung from their horse during a hunt, torn apart by a wolf and suffocated in a badgers set. Such tales of revenge never seemed so just.
There is such integrity and passion in these words. From defiant tales of personal battles won every day in the pursuit of mental health in an unforgiving society in ‘Greater than Fear’ , to the anti-police anthem ‘Sirens’. Make no mistake, I know these people, and they mean every fucking word they scream. This is the true spirit of diy punk.
The gatefold artwork was done by the incredibly talented Sean Fitzgerald and depicts, in minute detail, a decayed and crumbling wasteland, a dead child succumbed to the growth of weeds and flowers, a host to new life in the blighted remains. Such a theme resonates strongly with me. It is the age old tale of death and rebirth. Life from decay. Something which echos strongly in the Celtic inspired geometric inlay motif. Again, I know Sean personally and I imagine he thought long and hard about his design. This is not some thoughtless rendering of a dead baby for the sake of aesthetic. It is a representation of a crucial aspect of this band, both musically and lyrically; A realisation of the doomed path this society is headed, but a refusal to succumb to apathy. A will to continue, even if that be in utter rage. Hope in the darkness.

Available from:
TRUJACA FALA
DOGS AND VULTURES
CONTRAZT!
UP THE PUNX RECORDS