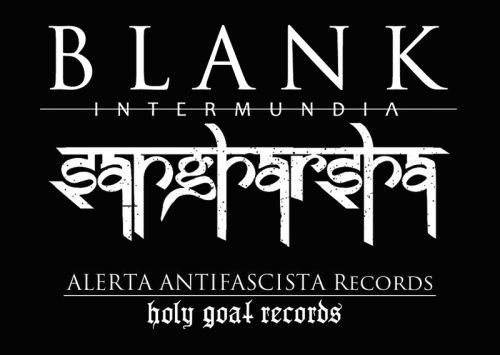 Within the vast and often chaotic global network that is the DIY Hardcore scene, like-minded bands may often exist for years without even being aware of each other. When their paths finally cross though, even under the most coincidental circumstances, strong and very fruitful alliances may be forged instantly. This is exactly what happened when SANGHARSHA, a NYC-based band consisting of four Nepali guys, who have been channeling the struggle of existence into crushing Hardcore since 2010 met German Negative Hardcore outfit BLANK, who have released two records entitled ‘Calix’ and ‘Suspiria’ and played shows all over Europe since their inception in 2011.
The axis New York-Ohligs-Kathmandu will be strong in 2015 teaming up for a split LP entitled ‘Intermundia’ as well as a short US-Tour in July/August. ‘Intermundia’ contains three new songs by each band, showcasing their different takes on dark, modern, crushing Hardcore. The whole affair was mastered by Brad Boatright at Audiosiege and will be out on Alerta Antifascista and Holy Goat Records on May 25th.