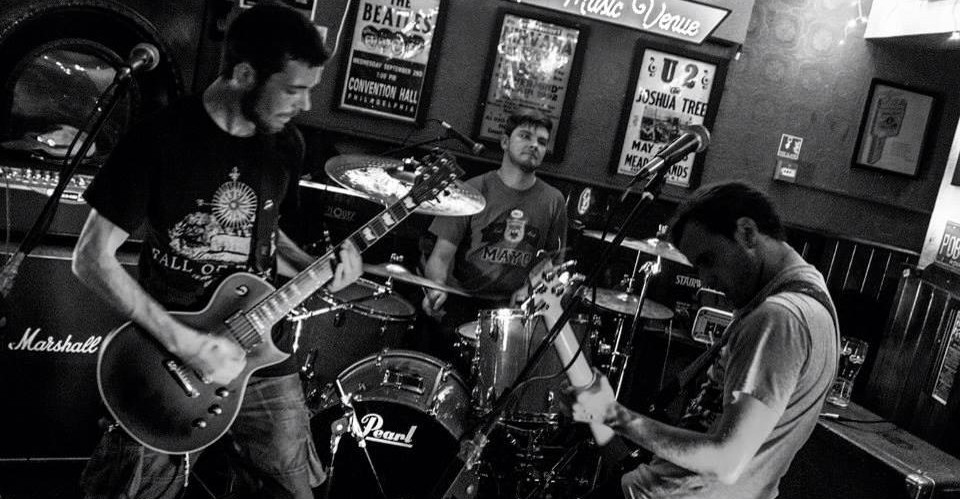 Subordinate from the North West of Ireland are to release ‘Respect Existence Or Expect Resistance’ their new LP this summer and we have been given the opportunity to stream the track ‘Money Talks, People Perish’ as well as the chance to catch up with the guys for a small interview. For those of you who do not know Subordinate think along the lines of Ekkia, Fall Of Efrafa and Easpa Measa. The record which features artwork by Costin Chioreanu will be released via Distro-y Records, Chainbreaker Records , Anarchotic Records, A World We Never Made Records, Don’t Live Like Me Records, Suburban White Trash Records, Pumpkin Records and also on Cassette via Soleman Records and Chainbreaker Records

Enniskillen is far from the crust capital of the world, how does the likes of subordinate stem out from off the beaten track? How do you feel you play apart with in the Irish music scene?

JOHN: It really is… FAR as shit from the crust capital of the world, so much so that I didn’t even know crust existed before Subordinate! How foolish I feel now…. Finding this new genre has opened up a whole underground world that has to be explored and for me Subordinate couldn’t be a better vessel to do it.

CHRIS: Originally I was playing in Absolutist in Scotland, so when I came back to Enniskillen the need to play crust was STRONG. There’s a healthy music scene in Enniskillen for its size, metal and punk has always been present since I’ve been around, so it was perfect setting to do something new there, as there have been no local crust bands there before. Overall though, it was just the love of the music that created the band.

JOHN: Growing up in Enniskillen, there was always a very open music scene, so for Subordinate it was a good place to start and put our music out. However, I think we’re just that little bit too far off the beaten track down here and I guess that’s why any chances we get were looking to travel somewhere, be it down the road to Belfast, Dublin or Galway, or hoppin on a Ferry over to mainland UK. I think that’s one of the things I love most about the crust scene, the fact you can play a gig someplace and there’ll always be some legend there to give ya a place to kip and a bite to eat! Just the whole DIY scene in general seems to be motivated from these good people and its cool as fuck meetin em! In terms of the Irish music scene I’d like to think we just add a little bit more goodness to the already awesome bands comin’ outta this place.

KNOX: Coming from the sticks of Ireland if you mention crust as a genre, you automatically get that stare of “What the fuck are you on about??”

How do you feel Subordinates sound has progress since your ‘To See their demise’ 12″ EP? What influences went into ‘Respect Existence Or Expect Resistance’?

CHRIS: Pffft fuckin vast question! Objectively, the recording quality has increased like x100 haha. We recorded the EP ourselves, because D.I.Ythefucknot, but had relatively little experience in the whole process so it gave it a gritty, rough sound, which to be honest I love and is what we had hoped to achieve at that point anyways. Also, I think with a lot of bands first releases they have all these raw, unfiltered ideas and write music without viewing through any lens, which I think was more so the case with the EP. With the new album, it was a culmination of all the music we have been listening to from then, throwing into one melting pot. The new songs are more technical and structurally interesting (and longer…), so recording with James in The Hive gave them the love and production quality they needed.

KNOX: Our style has changed a hell of a lot compared to the previous release. I feel the songs are more of an arrangement due to the being 7 -15 minutes long washed down with constant riffage and time signature changes, lyrics that are provocative and raise social awareness. Pretty much To See Their Demise on steroids… in terms of influences, Oi polloi, Alpinist, Easpa Measa and of course Ictus. Followed by beer and world/political problems.

What was the aim with using samples with in your track?

JOHN: Not sure if there was a specific aim intended in the first instance, but we wanted samples that sounded deadly as fuck and obviously we wanted each one to reflect what the song is about.
Also the fact that we’ve taken them from things we have a genuine love and interest in also makes them a really cool addition to the songs.

KNOX: I guess for the listener to gather clarity on the songs intention.

CHRIS: I was actually thinking about this recently. To an extent, the use of samples reflects how we interact with each other, quoting something or making a reference to something the person you’re talking with also knows. Maybe. But most of the time yeah it’s because they sound fucking cool as fuck

You are to release ‘Respect Existence Or Expect Resistance’ LP on vinyl and also on cassette what influence do you feel tapes still play in the world of iPods and Mp3s?

CHRIS: I have no issue with mp3s or the digital format (unless you’re paying the bomb for it), but cassette, as with vinyl has it’s own character. It has similar qualities to the vinyl experience, in that you are collecting a physical copy of a release, and you listen to the album as a whole or at least in two halves. It marries these characteristics with the compactness, sturdiness, and ease of use of a CD. Also, it has its own unique aural experience, as with vinyl. Tapes are cheap to make too. Vinyl production set-up is expensive, and for smaller labels it’s simply not viable. So tape is another way for the DIY scene to grow and spread sounds! Plus it’s punk as fuck. I mean, who uses tapes these days right? Mavericks do. Punks are mavericks. Tapes are punk. Flawless logic.

Any last words or plans for Subordinate?

CHRIS: Sure! First we need to get merch sorted and will do a new run of hoodies blah blah, some relentless plugging of the album haha, THEN we’re planning to get around as much as possible this summer! July/August/September will see us play Ireland, England, and Scotland, followed by a fairly extensive tour of Europe. So psyched to get back on the road and party with the punx!