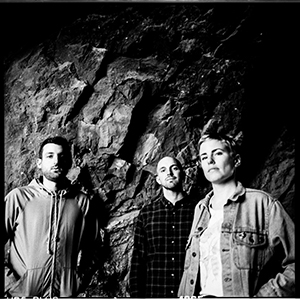 Oakland, CA trio Super Unison have announced a partnership with Deathwish Inc. for their debut full-length due out later this year. The band, which features Meghan ONeil Pennie (formerly of PUNCH) on bass and vocals, Justin Renninger (formerly of Snowing) on drums, and Kevin DeFranco on guitar, formed in 2014 and released a self-titled EP on vinyl and cassette formats in May of last year. The EP was incredibly well-received and praised by publications far and wide, from Rolling Stone to Brooklyn Vegan. The band toured the western portion of the USA following the EPs release, which included shows with Shook Ones, Self Defense Family, Coliseum, Dogs on Acid and more. As veterans of the Bay Area scene and beyond, Super Unison have become known for their incendiary live show in their relatively short time as a band thus far
Later this year, Super Unison will release their debut full-length on Deathwish. These twelve tracks were recorded this past February with Jack Shirley (Deafheaven, Loma Pieta, Frameworks) in Palo Alto, CA, and like their self-titled EP, Super Unison�s new songs are concise and intense, and generally stick between the 2-3 minute mark. Their songwriting has matured quite a bit, with a lot more “…melody, texture and structure to the songs, but still taking the same aggressive fast paced approach overall,” commented guitarist DeFranco.