War//Plague has just finished recording their latest LP “Into the Depths” which will come out on Phobia Records and Organize and Arise! which will be out later on this year.

War//Plague are also celebrating their 10 year anniversary this year and will be heading out for a small midwestern tour as well in July.To coincide with their tour and hitting the 10 year milestone they are planning on having their full discography on CD which will be available at any of their tour dates (check poster below) or for mailorder there after. 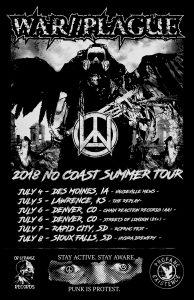