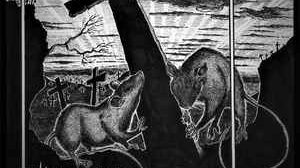 Warwound and Ultimo Gobierno Come Together For Split EP

Two bands formed in the 80’s one from Spain and one from the UK and both seemingly more active than ever have came together for a split 7″ Ultimo Gobierno from Burgos, Spain and Warwoundof Birmingham, UK.

The new 7″ which contains three tracks from Ultimo Gobierno including a cover of Warwounds Brainwashed translated to ‘Lavado de Cerebro’ and two tracks from Warwound including a cover of ‘Another War, Another Religion’ by The Varukers and originally written by members of Warwound. The split 7″ is out now on Nuclear Fear, Noise Of Hell, Puto Ruido , Distribuidora La Madriguera, Compañeros De Tumba and Carabrecol ‎