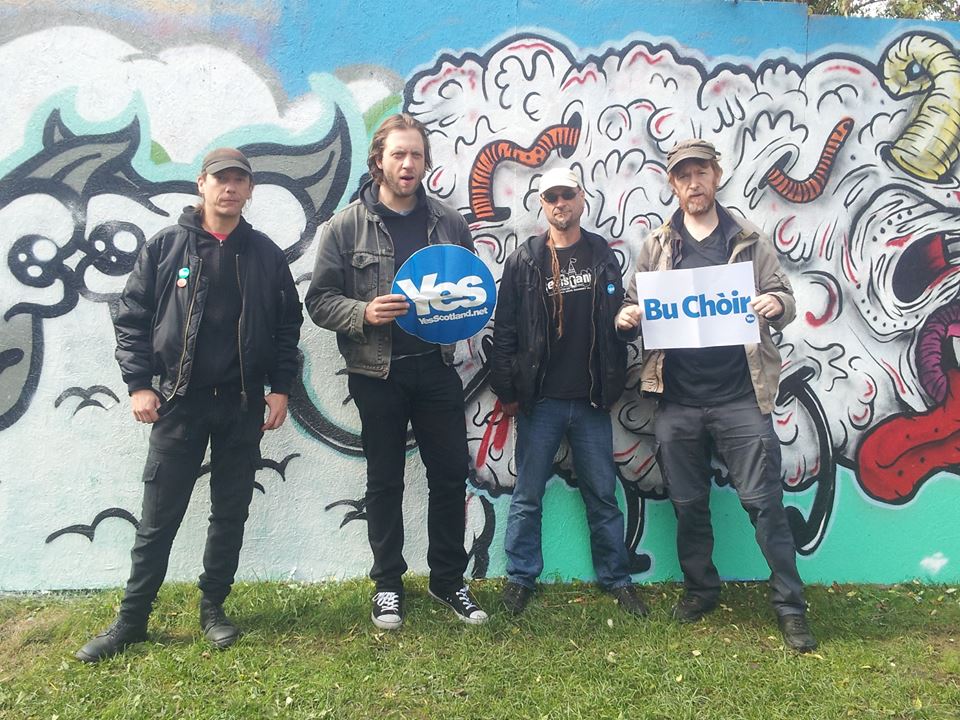 Oi Polloi recently recorded a new LP so while they were in the studio last month they thought they would also bang out a special song for the referendum on Scottish Independence while they were at it – and here you are – PLAY LOUD!

Independence isn’t an end in itself for us – but it would be a big kick in the balls for the Westminster establishment and a chance to both inspire people in the rest of the UK by showing them that an alternative to austerity and continued neo-liberal bullshit is possible as well as significantly improving a lot of people’s lives here in Scotland. Denying the London government the use of Scotland‘s resources to fund more nuclear weapons and more illegal foreign wars, rolling back the assault on the welfare state and the demonisation of the poor and disabled, increasing renewable energy generation, more respect for the Gaelic language, a more humane immigration policy, a chance for Scotland to play a more positive role in foreign affairs through things like opposition to illegal wars and more support for the Palestinians for example, the end of rule by the antiquated House of Lords etc etc – there’s a lot to gain and precious little to lose. Of course an independent Scotland wouldn’t be perfect – there would still be rich and poor, corruption, cops kicking innocent people’s heads in etc etc but just because it wouldn’t be an anarchist utopia overnight that’s no justification for not getting involved to use this chance we’ve got. Just standing on the sidelines shouting anarchist slogans isn’t going to help the sick and poor being driven to suicide by the bedroom tax and benefit sanctions or those being forced to eke out an existence subsisting on scraps from foodbanks. It doesn’t have to be like this.

How has Scotland reacted to BBC and state media blocking out the Yes vote argument and the use of tactics of fear mongering to scare the yet undecided?

Well unluckily for the BBC and co, thanks to the internet, people can now go online and check a variety of source like the excellent Wings Over Scotland, Newsnet Scotland, Bella Caledonia etc etc to see what is really going on so, rather than their lies and distortions helping them, in many cases the reverse has been the case as people have started to ask themselves why they are being lied to and that has moved them to support Yes. The other day for example the BBC’s Nick Robinson was caught out in a blatant lie claiming on BBC News that Alex Salmond hadn’t answered his question at a press conference. Unluckily for him and the BBC, the full footage was already available in various other places online and it’s just totally enraged people and made the scales fall from the eyes of a lot of folk who previously trusted the BBC. This of course has also lead to mass demos outside the BBC HQ in Glasgow as well as thousands of people refusing to pay their licence fees any more. The BBC has lost any trust and respect it once had.

Is Scottish independence a tool also being used by a darker element of nationalism that is using the vote to stir up any racial tensions?

The great thing about the independence movement is that the vast majority of people involved aren’t really “nationalists” at all. There hasn’t been an ethnic element to the campaign at all really – it’s not about who is “Scottish” or isn’t – it’s about everyone who lives in Scotland regardless of their race or nationality. The mass media are often keen to portray it as being all about some kind of “Braveheart”-esque “anti-English hatred” but that is just total rubbish. There are a lot of English people involved in the campaign through groups like English Scots For Yes and of course there are about half a dozen English SNP MPs in the Scottish Parliament. Groups like Poles for Independence and Scottish Asians for Independence have also been very involved too. The only people who have been going on about “Scottish” identity have actually been the No campaign who have frequently talked about being “proud Scots” and how “patriotic” they are. The rest of us aren’t interested in that bullshit. This is about getting rid of Westminster’s neoliberal nightmare and finding another way to do things not some ethnic nationalist bullshit. Of course all the really out and out racist fascist groups like the BNP, NF, Britannica, Britain First are all on the anti-independence side along with UKIP, the Tories, New Labour and the bigots from the Orange Order – they all believe in “Great” Britain. There just isn’t any organised fascist group on the pro-independence side.